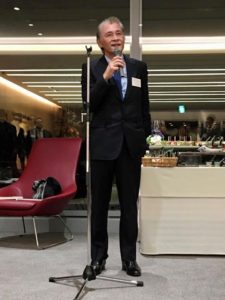 The entire LLAN team mourns the loss of one of its most committed members and big-hearted supporters.

Please allow me to share this eulogy because Ishiguro-sensei has been a truly special friend and incredible colleague.

No amount of words could convey our gratitude for his incredible charisma, impeccable legal mind, huge heart, countless hours and significant amount of which Ishiguro-sensei so generously contributed to support LLAN and LGBT community. I would like to share the story of our first encounter with Ishiguro-sensei, which made me his huge fan for years to come.

First impressions matter. I met Ishiguro-sensei at our first LLAN Gala 4 years ago, in October 2016. LLAN was still a concept between a group of founders and we were exploring whether the larger legal community would stand behind LLAN’s goal of promoting LGBT rights. While LGBT equality was part of pro bono activities for most international law firms and financial institutions, our key test was whether any of the big Japanese law firms would throw their support behind LLAN. I proposed an idea of hosting the LLAN Equality Gala to allow anyone willing to support us to come forward. Phenomenally, Sugimoto-sensei generously offered to host the Gala at Nagashima & Ohno’s brand new beautiful reception area in Marunouchi, for about 80 people. To hold the event, we needed to secure a few platinum sponsorships (100,000JPY at the time) to pay for catering and, most importantly, to showcase legal community’s support of LLAN’s mission. We were delighted to see that community quickly answered our call as we received multiple platinum sponsorship transfers from many international and all four big domestic firms, as well as GE Japan.

In addition, there was an individual platinum sponsorship payment that came from Tohru Ishiguro. The name did not ring the bell, so I asked my colleague Taro Tanaka, who exclaimed “WOW! THE Ishiguro-sensei?!” Taro joined Freshfields from MHM and said Ishiguro-sensei was “the legend” at MHM and on Tokyo’s legal market. Given that MHM has already made its platinum donation, we thought it was a mistake in case he transferred money on behalf of MHM, so we emailed Yukiko Otani-sensei, our key MHM link. She responded that she also was not aware of Ishiguro-sensei’s payment and when she advised him that MHM had already officially sponsored the Gala, he responded that he really wanted to put this personal funds towards LLAN’s objectives, which he deemed critical and overdue. 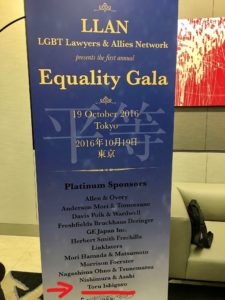 We were beyond grateful for such generosity and added Ishiguro-sensei’s name to the Gala banner, along the platinum firm sponsors, and to our programme. When I finally met him in person at the Gala – he was clearly no ordinary boring lawyer – with a sawayaka (trendy) tie and a friendly witty smile.I proudly showed Ishiguro-sensei his name on the banner and thanked him for being the only individual platinum sponsor (we had a couple of notable gold sponsors). Having seen his name along the list of the law firms, he exclaimed “hazukashii (embarrassing), I should have given 99,900 in order not to stand out!” It was obviously too late, but his genuine reaction won my heart.

Thanks to such generous support, our first Gala was a great success, with over 150 attendees and speakers from the US, UK, Canada, Australia and Japan. During his speech, Ishiguro-sensei spoke about the need for lawyers to stand up for what is right, both personally and professionally. And he did it on multiple occasions on behalf of both LLAN and LGBT ally community – being our “elder spokesman” during the press conference to launch the Viewpoint on Marriage Equality (wearing a pink shirt as a sign to defy stereotypes and overcome prejudices), the National Diet, the Japanese in-House Lawyers Association, the Foreign Correspondents Club of Japan, each of our five LLAN Equality Galas, and multiple other events.

Fujita-sensei always reminded me to ensure being mindful of the seniority and busyness of Ishiguro-sensei, as we tremendously appreciated his invaluable contributions towards LLAN and LGBT equality in Japan. I certainly hope I showed my utmost gratitude, but I cannot help the feeling of utter sadness that we won’t get to see his smile again and that he won’t attend my wedding (at which he promised to show his dance moves). We just need to make sure that our work continues his legacy and to make him smile at us from above.

Thank you so very much, Ishiguro-sensei. We promise to make you proud!