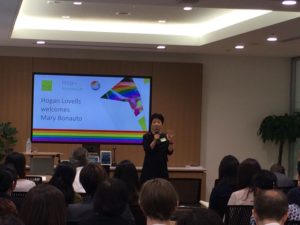 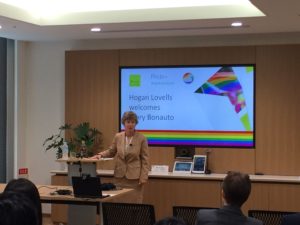 On 2 August 2017, Women in Law Japan hosted a seminar with US LGBT rights advocate Mary Bonauto as our keynote speaker. Mary has served as the Civil Rights Project Director for GLAD (GLBTQ Legal Advocates & Defenders) since 1990. In 2015, she successfully argued to establish freedom to marry for same-sex couples nationwide before the US Supreme Court in the historic case Obergefell v. Hodges.

At the seminar, Mary discussed the importance of same-sex marriage and the challenges she faced while fighting for its legalization. Without marriage, loving and committed same-sex couples were merely “legal strangers” and were not entitled to the legal, financial, medical, and familial protections conferred by civil marriage. She particularly focused on the critical point that family is one of the fundamentals of the same-sex marriage issue. As she said, “LGBT people grew up in families, and many of them deeply care about having their own families…it’s a human aspiration.”

This seminar attracted about 90 members of Women in Law Japan and Hogan Lovells lawyers and staff.

Hogan Lovells Tokyo Partner Rika Beppu introduced the theme of this seminar and explained the discussion on same-sex marriage in Japan and the importance of diversity and inclusion in and outside the workforce.